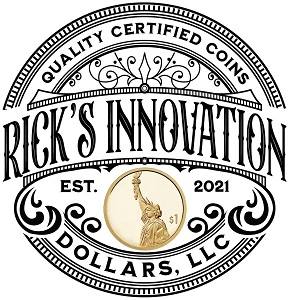 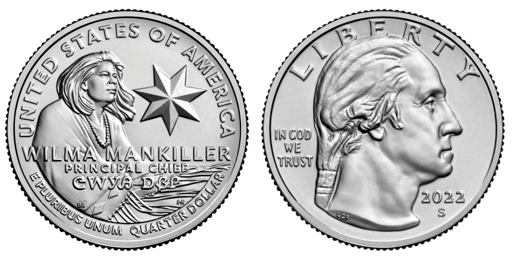 The Wilma Mankiller Quarter is the third quarter of the American Women Quarters Program™.

Wilma Pearl Mankiller was the first woman to serve as chief of the Cherokee Nation. Mankiller was born on November 18, 1945, and died on April 6, 2010. She lived on an allotment in Adair County, Oklahoma, before moving to San Francisco at 11 as part of the federal government’s urbanization efforts. After graduating from high school, she married a well-to-do Ecuadorian, with whom she had two daughters. After being motivated by the political and social movements of the 1960s, Mankiller became involved in the Alcatraz occupation and the campaign seeking land and compensation for the Pit River Tribe. As a social worker in the early 1970s, she primarily worked with children during her five years.

Mankiller began working as an economic stimulus coordinator after she returned to Oklahoma. Thanks to her experience in grant writing, the Cherokee Nation hired her to direct its Community Development Department in the early 1980s. As a director, she implemented innovative community projects identifying challenges and solutions in rural areas. She even starred in a film directed by Charlie Soap and Tim Kelly called The Cherokee Word for Water, named one of the best American Indian films of the last 40 years by the American Indian Film Institute in 2015. In addition, the Department of Housing and Urban Development recognized her Kenwood project with a Certificate of National Merit.

During the 1983 tribal elections, Principal Chief Ross Swimmer encouraged her to run, inspired by her management skills. When she won, she was the first woman elected to Principal Chief in the Cherokee Nation, which she held until 1995; she began working for the Bureau of Indian Affairs during this time. Under her leadership, the Cherokee government established early learning centers, adult education programs, job training programs, health clinics, eye clinics, and ambulance services. In addition, she generated revenue as a businesswoman through factory operations, retail ventures, restaurants, and bingo operations.

After leaving politics, Mankiller published a best-selling autobiography about healthcare, tribal sovereignty, women’s rights, and cancer awareness. She was afflicted with several chronic illnesses, including polycystic kidney disease, myasthenia gravis, lymphoma, and breast cancer, requiring two kidney transplants in her life. Her ten-year battle with pancreatic cancer ended in her 2010 death. Numerous awards were presented to her on the local, state, and national levels, including 14 honorary doctorates. Additionally, she received the highest civilian honor: the Medal of Freedom.

Mankiller’s likeness will be featured on a quarter coin in 2022 as part of the United States Mint’s American Women Quarters Program.

She strengthened negotiations between the federal government and Native Americans through her policy of self-determination. She was a role model and inspiration for Native Americans and non-Native Americans. “The young Cherokee girls would never think that they would become chief before my election,” Mankiller explained. She served on the founding board of Women Empowering Women for Indian Nations (WEWIN), and a scholarship was given in her honor at the conference in 2010.

A 2013 feature film – The Cherokee Word for Water – tells the story of the Bell waterline project, which helped launch Mankiller’s political career and led to the relationship between her and her future husband, Charlie Soap. Mankiller is played by Kimberly Norris Guerrero, while Moses Brings Plenty plays Soap. Director Soap and producer Kristina Kiehl spent 20 years fundraising and preparing for the film. In addition, the Mankiller Foundation supported the production through educational, community, and economic development programs.

Around 120,000 people are treated each year at Cherokee Nation Health Services, one of the nation’s busiest hospitals. The Cherokee Nation expanded and upgraded its health center in Stilwell in 2015 as part of an expansion project. A documentary film called Mankiller was produced in 2017 by Valerie Red-Horse Mohl, who emphasizes the resilience of Native Americans in the movie by examining family heirlooms and interviewing those who knew Mankiller, providing insight into her life. Mankiller was honored by being inducted into the National Native American Hall of Fame.

Along with Maya Angelou, Sally Ride, Anna May Wong, and Nina Otero Warren, Mankiller will be included in the U.S. Mint’s American Women Quarters Program in 2022. The nation’s highest civilian honor, the Presidential Medal of Freedom, was awarded to Mankiller in 1998. In addition, she was inducted into the National Women’s Hall of Fame in 1993.

Laura Gardin Fraser originally composed and sculpted a portrait of George Washington for the coin’s obverse to commemorate Washington’s 200th birthday. Mellon chose the Flannigan design from recommended illustrations for the 1932 quarter.

Wilma Mankiller is depicted on the reverse (tails) with an unwavering gaze toward the future. She is wrapped in a traditional shawl, with the wind at her back. There is a seven-pointed star representing the Cherokee Nation to her left.